Checking Out The Flashy 6ix9ine Grillz AKA Tekashi69

If you’re a fan of hip hop, there is a good chance you’ve heard of 6IX9INE or Tekashi69. This Brooklyn-based rapper has burst onto the scene like an atomic bomb and there is a good chance that he is only just gotten started. With sick rhymes and flashy grillz to back it up, this young rapper is sure to make a splash on the international scene and claim his spot along the likes of Tupac and Biggie. Think you know everything there is to know about Tekashi69? Think again! This rapper and his short career will be explored in greater depth below.

In the early days, nobody could’ve knew that Daniel Hernandez would become a hip hop phenomenon. The rapper was born on May the 8th of 1996. He is now based out of Brooklyn, New York. While he is now based out of Brooklyn, Hernandez is actually from Bushwick. He has Mexican and Puerto Rican descant in his background. While his father was Puerto Rican, his mother was Mexican. Even crazier is the fact that Hernandez actually enjoyed heavy metal growing up. Now, the 6ix9ine grillz are one of the hottest things on the planet.

The rise from the slums to stardom was a pretty quick, yet windy one for Hernandez.

Hernandez is pretty much like his fellow rappers before him. He completely dropped out of school in the 8th grade after getting expelled. At the age of 13, his father was murdered. After that, he needed to make money, so he acquired a job as a busboy. Of course, he knew where the real money was and got caught up in the drug game. Besides working as a busboy, Hernandez maintained several side jobs, including selling weed and working at a bodega. Tekashi69 hails RondoNumbaNine for helping him get motivated and to pull away from his past deeds.

Now, it is impossible to find a rap fan that hasn’t seen the flashy 6ix9ne grillz! Hernandez’s songs are everywhere and that is no coincidence. 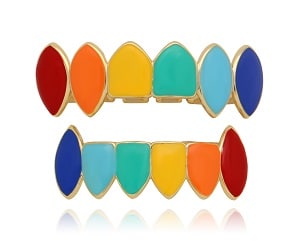 Hernandez was encouraged by several of his friends and peers to get started with music. However, he credits RondoNumbaNine with giving him the motivation to move forward and take the leap of faith. In 2015, the rapper burst onto the scene when he collaborated with Bodega Bamz. He received a lot of praise from his partner. Bodega went on to explain, “I think because of the shock value that he brings, he’s gonna be one of those artists that you won’t be able to turn the TV off to.”

So far, Bodega has proven to be correct. It should also be noted that Tekashi69 has stayed off of YouTube and SoundCloud. He had no accounts there and simply distributes his music through the Slovakian label, F*ckthem. In early 2017, Hernandez went on his first tour. He is incredibly unique and attempts to incorporate different themes into each of his music videos. Anyone who is a fan of the rapper with know this first hand.

While almost all rappers wear grillz, the 6ix9ine grillz are always unique. At some point, the Brooklyn-based rapper was sporting multi-colored grillz that perfectly matched his hair. He has also been seen donning silver grillz with fangs. It is safe to say that Tekashi69 is unlike anyone else on the planet and the 6ix9ine grillz tell the story. On any given day, Tekashi69 will wear unique grillz in an attempt to shock and mesmerize the audience. It is clear that his actions have paid off dividends.

Anyone who claims to be a fan of rap music needs to get to know Tekashi69 sooner rather than later.