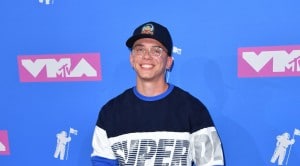 Logic (Sir Robert Bryson Hall II)  did not show signs of slowing down after his career launching studio album in 2017. In fact, the 28-year old American rapper is said to have just begun exploring his creativity in another art form – writing a novel!

In his tweet from November 16, 2017, the singer/songwriter and record producer from Maryland, announced that he was on his plane writing his novel ‘Supermarket’.

Since then, there have been restless anticipations from his fans about a release of his first novel. Is it going to be autobiographical, a confessional or romance? The options have been unclear but it is true that the 2018 Grammy nominee put in a lot of his personal experiences into the novel.

In December, it was initially revealed to a spokesperson for Billboard that the novel would be about a guy who fell in love with a girl and that the story would be accompanied by a soundtrack by Mac DeMarco who is known to have produced most of Logic’s music.

But in a later report from his official website, fans are expected to prepare themselves for a psychological thriller which is funny but with dark undertones about a character named Flynn after he discovered a crime scene at the supermarket. The description in the website also includes a mention of murder, drugs and sex in an aisle.

Supermarket is also said to be narrated in audio by the rapper and it announced in his Twitter.

Logic is not the first rapper to pen down a novel after launching a consecutive musical career. The path has been opened by other rappers such as Meek Mill who wrote an expansion on a series of his music from “Tony Story” in 2013 and “Invincible by Style P in 2010.

There are other artists like Eminem, Jay-Z, Timbaland and Gucci Mane who worked on autobiographies but this is a leap of faith for Logic to plunge into a full-blown fictitious novel.

The rumor of the upcoming novel was confirmed to release this year when Logic posted a picture of himself to his 6.1 million followers on Instagram with the caption “Supermarket 2019. Who is grabbing a copy?’’

The 28-years-old rapper who has a number of mix tapes, several albums, successful YouTube channel and his own record label under his belt has always shown signs of massive talent since his childhood. Even though he had a tough upbringing in a world surrounded by gangster and drug dealers, he always has his passion for music and the arts.

There are no official announcements on the exact date of publishing yet, but it was hinted in several interviews that the book will be released on March 3rd, 2019.

If it is true, Logic will also be the youngest living successful rapper to publish a fiction novel while his career is still soaring. He has won the MTV Video Music Award in 2017, the BMI R&B/Hip-Hop Songs and was even nominated for the Grammy is 2018. Now, with the announcement of Supermarket on the way, let’s see how creative this young rapper from Maryland really is!