If you’re a big fan of hardcore rappers, there is no doubt that you have a soft spot for Chief Keef. This American rapper always pushes the boundaries and doesn’t care who gets in his way. Keef grew up in rough streets and he is simply not afraid of anything. Unfortunately, this has caused him to get into some legal trouble during the past few months. Just recently, he was arrested for DUI. There is a good chance that Chief Keef will bounce back better than ever and the Chief Keef necklace will always be right there around his neck.

Chief Keef was born as Keith Cozart in Chicago, Illinois. At the time, Keef’s mother was just 16 years old. He was named after his dead uncle. He doesn’t know his estranged biological father. As a minor, Keef’s grandmother became his legal guardian. He lived with her during his time in Chicago. At the age of 5, Keith took a liking to hip hop music. Early into his life, he began using his mom’s karaoke machine and blank tapes to begin recording his very own music. As a youngster, the hip hop prodigy attended Dulles Elementary and the Banner School.

At the same of 15, Keith Cozart stopped attending the Dyett High School.

Glory Boyz And The Glo Gang 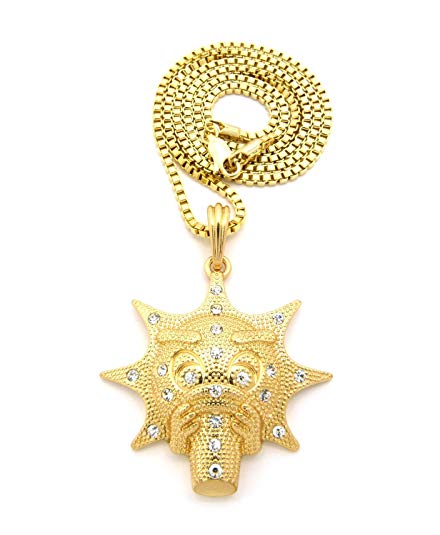 After signing with Interscope Records, Keef created the Glory Boyz Entertainment and the Glory Boyz chain. Unfortunately, Glory Boyz wouldn’t last very long. Everything fell apart in January of 2014. At this time, Keef admitted that GBE had come to an end. Around this time, Keef struck up a new idea and created an entirely new record label, which was called Glo Gang. Today, the Glo Gang chain is one of the hottest fashion accessories in all of hip hop. Before his death, Blood Money finally revealed which members actually belong to the Glo Gang.

He claimed that the group included Chief Keef, Ballout, Capo, Tadoe, Tray Savage, Justo and of course, himself. Unfortunately, Blood Money was murdered in the Englewood neighborhood of Chicago on April 9, 2014. It was most definitely a devastating blow to Chief Keef and the Glo Gang

Breaking The Rules And The Chief Keef Grillz

Chief Keef has never been the type of artist to obey the rules. This is true in terms of the law and the Chief Keef grillz. Keef has found himself in trouble with the law numerous times. He was arrested in early 2011 for heroin manufacture and distribution. Later that year, he got into a police chase and was shot at. Thankfully, police missed their target. Nevertheless, Keef was arrested and charged with resisting arrest and other crimes. He has been arrested several times since then and was also sued at one point.

Chief Keef is also well known for the Chief Keef grillz. He is known to have a love for fancy jewelry. If he isn’t wearing it around his neck, he has it on his teeth! You can guarantee that Keef always looks like a million bucks thanks to those Glo Gang chain and grillz.